The Capped Bust Half Eagle, sometimes referred to as Capped Bust to Left, represented the second series of $5 gold pieces within the United States. The series was produced from 1807 to 1834, with two different obverse designs and a common reverse design. Coins would be struck for circulation for each year of the series with the exception of 1816 and 1817 when the Mint was closed as the result of a fire in early 1816. While mintage levels covered a wide range, a more significant factor was the massive exportation and melting which leads some issues to be exceedingly rare. In general, the issues struck from 1807 to 1812 are the most easily acquired, while those from 1829 to 1834 are rare and seldom offered for sale in any grade. The 1822 half eagle represents a significant rarity with only three pieces known to exist. 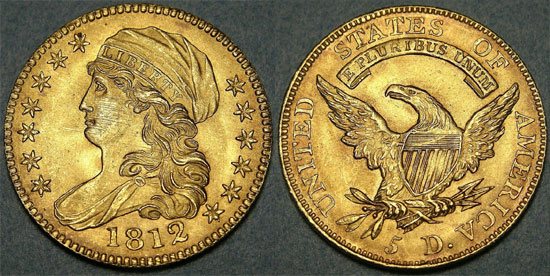 The half eagle had first been minted in 1795 with the initial design produced in two different subtypes until 1807. At that time, a new design would be introduced for all gold and silver denominations, representing one of several attempts to standardize the products of the early mint. The new design was created by John Reich and bore little resemblance to the previous issues. As an Assistant-Engraver who had joined the Mint only months earlier, his work was not easily accepted by the older employees. However, in modified form, it would be featured on many denominations until the 1830’s, most importantly on the half dollars, whose design remained virtually unchanged until 1836.

Many researchers have considered Reich’s design to be an artistic improvement over the previous designs. The obverse features a head of Liberty, facing left. The upper part of her bust is visible, partly veiled by drapery. She wears a Phrygian or Freedom cap, which is inscribed with the word “LIBERTY”. Stars are placed in front of her, as well as behind her, and are configured 7 left, 6 right. Long, curly hair extends down from under the cap and below the truncation of the neck. The date is near the bottom rim, slightly curved. This obverse design would be struck from 1807 to 1812 and is usually considered to be the more available of the three subtypes. 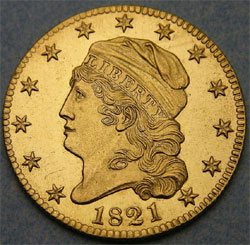 A variation of the design would be introduced in 1813, often referred to as Capped Head or Capped Head to Left. While similar to the initial design, there are some differences, most notably the absence of Liberty’s bust. Instead the portrait includes only the neck and head, with Liberty carrying a slightly more mature appearance. The stars now appear fully surrounding the image, no longer separated by the cap. The date is placed directly under the truncation of the neck, slightly curved as well. This subtype would be struck from 1813 to 1829, with the head in slightly higher relief during the first three years.

In 1829, the diameter of the coin would be reduced and the design would be altered by William Kneass, representing a third subtype. While the major design features have remained the same, the execution of the hair is somewhat different, and all lettering and stars are smaller. This design would be used until the end of the series in 1834.

All three of these subtypes share a common reverse design, although it was slightly modified by Kneass in 1829 most visibly by the smaller lettering. The reverse features an American bald eagle with its wings spread, in a more natural position compared to earlier designs. A large shield appears at the eagle’s breast and its claws hold an olive branch and three arrows. The motto “E PLURIBUS UNUM” appears on a scroll, placed above the eagle. The denomination expressed as “5 D.” appears at the base with “UNITED STATES OF AMERICA” surrounding.

Compared to the previous series, relatively few varieties are known for the Capped Bust Half Eagles. The Red Book lists a number of different lettering sizes and other varieties, and the Bass-Dannreuther book adds a few more for some dates. The most varieties are known for the 1807 (eight) and 1820 (nine) dates, but collecting these issues by die variety is an extremely difficult task which is undertaken only by the most devoted specialists. Most type collectors will set a goal of acquiring a single piece of each of the three subtypes, and this already is a major accomplishment thanks to the rarity of the Capped Head issues. A full date set is nearly impossible, as only a single 1822 half eagle is currently on the market.